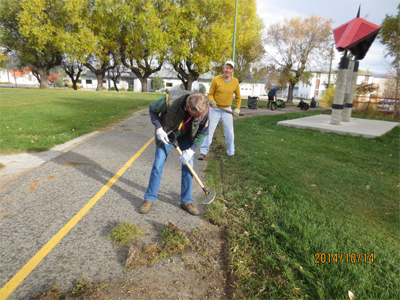 First of all, Rotary Way will be linked to North Star Rails to Trails (previously known as the Rails to Trails project) which runs to along the old CPR rail bed to Kimberley. The route for the “Link” runs along McPhee road from the old CPR rail bed near Theater Road, along McPhee Road, past the Home Depot, past the Transfer station to the Chamber of Commerce on Cranbrook Street. The rest of the Link on the east side of Cranbrook St. was constructed by the City of Cranbrook last year. BA Black Top is working on this part of the trail. Paving will be proceeding soon. A good deal of time and effort was taken in consideration of various alternative routes for the Link. Safety and ease of use were primary concern in selecting the route. A word of appreciation is extended to the Regional District of East Kootenay for their co-operation, with respect to the trail in front of the Transfer Station. Similarly thanks the Chamber of Commerce for their assistance in providing for the trail in front of the Chamber building. The Chamber office will be a great spot for visitors and residents to pick up trail information, park, and head out into the City via foot or bicycle. A large gravel surface parking lot has been constructed by the City on the south side of McPhee road near the Chamber. This parking lot will provide spots for large trailers and motorhomes as well as trail users. Walkers and cyclists can head out the south to the North Star Trail towards Kimberley from this point as well. Funding on this part of the project was provided by the City of Cranbrook, Rotary Club, Columbia Basin Trust and the Province of BC.

Rotary Way Maintenance: Maintenance has been proceeding on the existing Rotary Way. Rotary way was constructed in several stages over the past 15 years and several items required upgrade. 2 Bridges were replaced last year in the St Mary’s school area.

This summer, line painting (and Stop Bars) and retaining wall repair was carried out by the City of Cranbrook. Right now pavement repairs are underway at various locations with BA Blacktop doing that work for the Rotary Club of Cranbrook. There are a few areas where the pavement had deteriorated. Signs along the trail will be upgraded and replaced where necessary. Funding assistance was provided for this work by Columbia Basin Trust in cooperation with the City of Cranbrook. BA Blacktop has also donated a portion of their work to this project.

Rotary Way Clean Up: Rotary members are actively cleaning gravel and other debris from the trail. In some areas weeds and grasses are encroaching on to the trail. These are being trimmed back to widen the trail and reduce prevent damage. Sandor Rentals has donated some equipment for this work.We look forward to further expansion of the trail in the future.