The club began investigating this project in March of 2013. In August of 2013, Joyce Zwick, from the Pincher Creek Club made a presentation to our Club regarding this project. We contacted the local school board and the private schools in September of 2013 to determine the numbers of grade 3 students presently enrolled in the 2013 classes.

Then drafted a 3 year proposal, as recommended by Joyce, and presented this to the Club. In late September $3,500.00 was approved. We then contacted The Dictionary Project in Charleston S.C. and placed an order for a 3 year supply of English and French/English dictionaries. 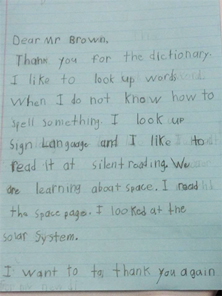